Yesterday, Love Island’s Chris Hughes released a bizarre video campaign for a collaboration with Topman called “L’eau de Chris”. The video posted on Instagram received a lot of criticism, labelling Chris a joke and a narcissist for selling the drink for £2. The post saw the 24-year-old star posing in his underwear with “Mineral water infused with a Chris Hughes tears”.

As an avid Love Island viewer (no shame here) I assumed that the ad was a parody and a p*ss-take – Chris is known for his dead-pan humour and providing many giggles to millions of viewers this summer. To my surprise the campaign was in fact real, but not for a self-absorbed product to build his brand. Chris has teamed up with mental health charity CALM (Campaign Against Living Miserably) to raise awareness about male mental health and the male suicide epidemic.

CALM launched the #Don’tBottleItUp campaign to urge men not to internalise their emotions after it was found in a poll for YouGov that 84% of UK men say they bottle up their emotions. Chris collaborated with world famous photographer RANKIN for this project.

L’eau de Chris? What’s really ludicrous is that suicide is still the single biggest killer of young men in the UK. We live in a culture that encourages men to “man up” and bottle things up. That’s why I’ve become an Ambassador for CALM and why together with TOPMAN we want to show men across the UK that it’s okay to open up instead of bottling it up.

Hughes is now proudly an ambassador for CALM, and broke down in tears at an event yesterday whilst explaining his own struggles with mental health. Whilst on Love Island, Chris was praised for being very open with his feelings, something which men and boys struggle with immensely. Whoever chose Chris as ambassador certainly hit the nail on the head when it comes to targeting young people, as his name is everywhere in the world of gossip and celebrity since stealing our hearts on ITV2.
The limited edition promotional run of L’Eau de Chris water bottles (yes they are real) created for Chris’s campaign launch will now be auctioned here, with all proceeds going to support the charity. Also, Topman will donate £2 from every pack of Topman boxers sold from 10th – 31st October to CALM, in support of the #DontBottleItUp campaign.

Stephan Dybus is a German artist based in Berlin whose watercolour paintings depict relationships, life, his career and experiences (mainly negative ones). Stephan’s work, at first glance, is not representative of the aesthetic trends and styles I tend to be interested in, but his context and narrative is so powerful and hilarious that it just works so well.

I want to transfer the essence of my inadequacy as an urban hipster/melancholic artistic into humorous illustrations. I want to quote from the world that I come from. I enjoy drawing my little funny miniature characters – they can do anything, they look stupid, they don’t care about it, unlike me, they are free. 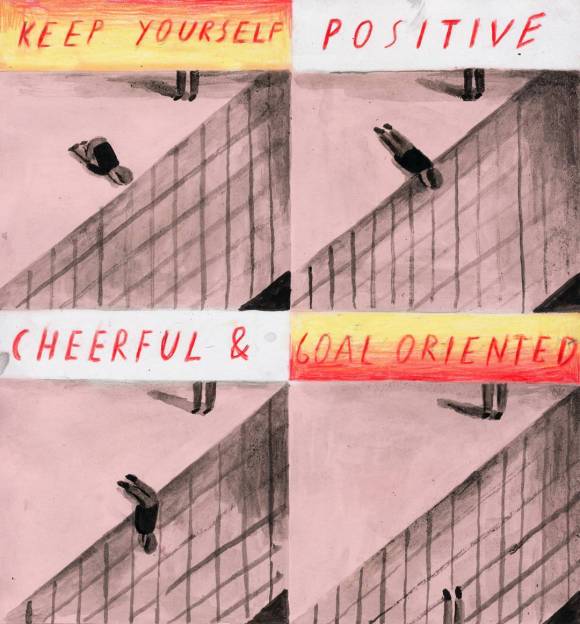 ‘Aquarelle’ is the technique Stephan has adopted in his art, in which he paints with thin, transparent watercolours, after sketching out his ideas with pencil. The style Stephan has created looks almost juvenile, but it certainly visually translates his thoughts – it’s almost like the drawing equivalent to quickly jotting down thoughts in a diary or journal.

The stories are so deadpan, exploring failure and relatable experiences life throws at us, and translating this through sketchy, painted characters. Stephan states that he gains inspiration for pieces at any time, particularly during conversations, which adds to the instantaneous, unusual context of his characters’ stories.

Stephan has also explored recreating his art in 3D and through ‘low poly art’/paper craft:

Period Equity: Periods Are Not a Luxury

Just like here in the UK, 36 states in the US still collect sales tax on tampons and sanitary towels. In June 2017, the federal Senate in Australia voted down a motion by the greens to remove the GST from all female sanitary products, a tax which does not apply to condoms or lubricant. Absurd right?! So, ad agency J.Walter Thompson and The Sweet Shop created an absurd product to go with this tax law, along with a tongue-in-cheek campaign for Period Equity.
Along with the help of actress/model Amber Rose’s sultry voice, they point out that 36 US states have failed to classify menstrual products as a necessity, therefore taxing them as a luxury… just like a diamond necklace! The campaign actually launched at Amber Rose’s OPENed Women’s Conference and annual SlutWalk on September 30th in LA.

This isn’t the first time I have blogged about Period Equity – the redesign by Pentagram’s Paula Scher caught my eye earlier this year.
Most people are not aware that the tax targets half of the US population, and I definitely think this issue should be raised (again) in the Houses of Parliament here too. What a fantastic campaign.

We were thrilled to collaborate on this project with JWT and Amber Rose. There’s a long road ahead in the fight for safe and accessible menstrual products for all, as well as instigating open, shame-free conversation around periods. This campaign, coupled with Amber’s unflinchingly strong voice on gender issues, is a smart approach to drumming up much needed discourse around menstrual equity, and calling for systemic change as well.