Ad agency Wieden + Kennedy were commissioned by Instagram to create the new (and first ever) ads for Instagram. The Amsterdam offices created “Stories Are Everywhere,” for the Instagram Stories campaign – Instagram’s first global campaign – with the aim to promote features such as live video, brushes and stickers.

Reflecting how the platform behaves, the campaign’s executions are intended to inspire and excite the audience about the many possibilities available to express themselves. Film content presents small, unexpected moments that are instantly sharable and dynamic outdoor is contextual to the user’s environment. Within the Instagram app, function drivers educate users about the array of features. These executions playfully work together to remind users that Instagram Stories is the place to share life’s highlights and all the casual, everyday moments in between.

The campaign was shot on an iPhone, using just the Instagram app: 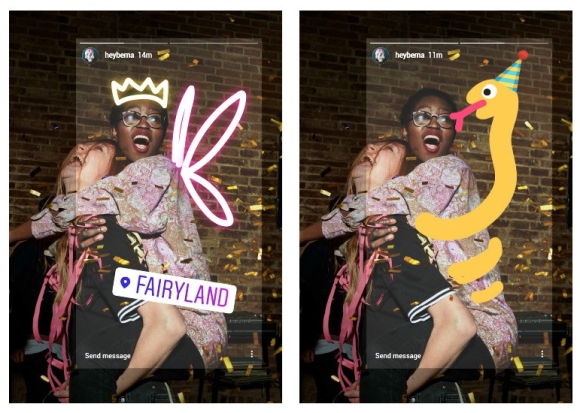 However, the short films showing a juxtaposition of professionally shot footage and “homemade” style footage, does not work for me. They appeared at the Insta Stories Festival in Cologne, Germany last month:

Praised for celebrating the diversity of expression, they aim to release 20 to 25 films by the end of the campaign, with over 270 billboards and guerrilla OOH, appearing on train stations in Philadelphia and Milan. The concept and the print ads work nicely, but for me the short films above looks like some weird montage. What do you think?

The film compilation is a nay from me! The rest of the campaign – meh. Disappointed as a huge Instagram user and fan.