WCRS were commissioned by Pride in London to create a campaign for Pride 2017, whilst also marking 50 years since the legalisation of homosexuality in the UK. The campaign has been huge, featuring TV ads for Pride for the first time ever. In fact, the campaign has been split into two narratives – love and hate – to portray both ends of the spectrum for the LGBT+ community.

Hate
The first part of the multimedia campaign explored hate crime, emotionally and physically, including posters, Wi-Fi takeover, an event, London taxi skins and a film:

Additionally, an advert directed by Fred Scott will appear exclusively on Channel 4 during a special season of programming, followed by four films. The emotional advert (below) ‘The Apology’, features apologies from those who have lost relationships with love ones after judging and not accepting their sexuality:

Love
The second part of the multimedia campaign, released today, will include digital OOH sites portraying real life love stories from members of the LGBT+ community, illustrated by 30 different artists and illustrators. Illustrators have created the works for free, using the branded heart ‘pin’ icon, which will be available at the Tate as part of their Queer Britain season.
Here’s a few of my favourite illustrations: 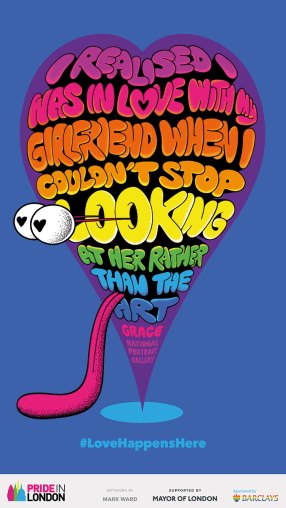 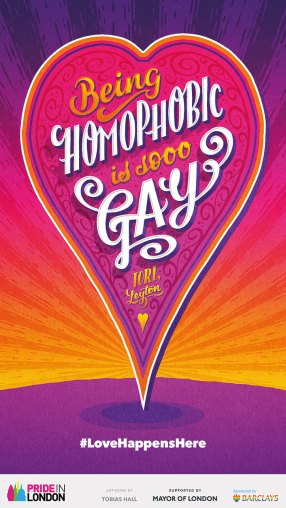 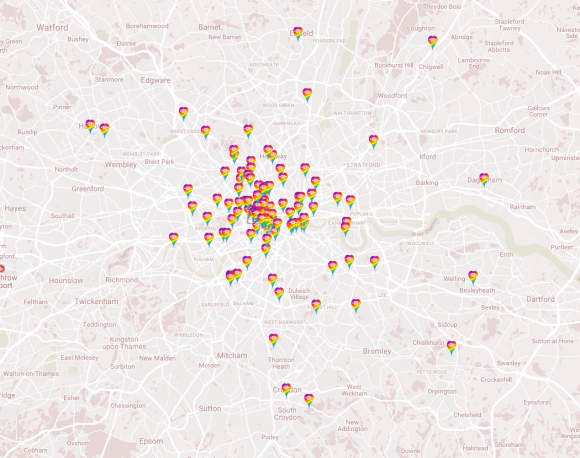 The ‘Love’ aspect of the campaign aims to show that love happens in London despite the sad reality of the ‘Hate’ part. Ross Neil, ECD at WCRS said:

This is a campaign that started from a negative place of hatred and has blossomed into a full technicolour, full volume, inclusive expression of love. The greatness of the creative is matched only by the sheer scale of companies and individuals.

The campaign doesn’t stop there – Pride are encouraging Londoners to create their own pins and share their love stories on social media. It’s a fantastic campaign, and whilst I’m not the biggest fan of the original heart pin design itself, the multi faceted narrative this campaign has explored is wonderful.

BBC Creative / Mother: Sorry Not Sorry for Being Me

Ad agency Mother (London) have teamed up with BBC Creative to create a branding campaign for BBC Three’s new project. Created by Mother Design, the campaign is for a new season of original programming about self-expression – something that sounds right up my street! This is an integrated campaign, which the audience can contribute towards. Engaging with young, diverse viewers with a message about identity and uniqueness, the aim is to promote BBC Three, and ignite a conversation about self-identity. The campaign also encourages viewers to create their own poster and share it on social media platforms.

The campaign includes online media, DOOH, billboards, broadcasting through the BBC’s own channels, and social media:

I’m definitely a fan of this campaign both in terms of concept and execution. The art direction is simple but bold. It’s also nice to recognise the faces of those in the campaign (above)!

Skittles: Give the Rainbow | Disingenuous marketing tactic or LGBT+ ally?

Last year, ad agency adam&eveDDB (represent!) created a campaign for Pride by stripping off their iconic rainbow colour packaging. The “letter” part of the campaign reads:

So this is kind of awkward, but we’re just gonna go ahead and address the rainbow-colored elephant in the room. You have the rainbow … we have the rainbow … and usually that’s just hunky-dory.  But this Pride, only one rainbow deserves to be the centre of attention—yours. And we’re not going to be the ones to steal your rainbow thunder, no siree.

This year, Skittles have brought back the campaign, and it got me questioning the disingenuous nature around using LGBT+ issues for marketing purposes. I’ve blogged about this concern numerous times, and I think it’s important to do one’s research before making any assumptions about a brand’s sincerity. I’m sat at my desk in adam&eveDDB writing this, so putting my bias aside I automatically had negative connotations towards this campaign as many brands use social issues as a marketing ploy. My first thought was “what are they doing to actually support the LGBT community in a physical way? Are they donating? Are they providing support for LGBT youth? Are they supporting families who have lost victims of transphobic violence?”
On a totally creative, marketing, ideas-based note, the campaign idea itself is great – simple, but great. There’s been a weird online backlash claiming that the sweets are racist for promoting “white Pride”. I don’t understand that. The campaign has nothing to do with race.

Skittles’ aim was to tell Pride that they didn’t want to steal their “rainbow thunder”, but some have said that using the the LGBT rainbow connotations as a campaign is doing exactly that. With these LGBT issues so close to my heart, it’s hard to see past the fact that Skittles (Wrigley UK) are just doing their job – creating a marketing strategy to boost sales and awareness of the brand.
However, the positive side of me wants to say that all publicity is good publicity – if a brand is openly supporting their LGBT employees and consumers, that can’t hurt! In reference to my earlier point regarding actions speaking louder than words, I discovered that for Pride 2017 the limited edition rainbow-less Skittles packets are in association with Tesco, who are donating 2p per packet to Tesco’s LGBT+ charity partners. Skittles aim is to show their support again for Pride, and to celebrate diversity and inclusion. I’m glad this statement is backed up by an actual charitable donation rather than jumping on the back of a very important celebration of human rights.

To conclude, Skittles absolutely are LGBT+ allies, and I’m so happy to see that Tesco are too!

I’ve been a huge fan of design and motion studio ManvsMachine for years, and their latest award winning project for Nike goes to show that they’ve undoubtedly still got it! Winning the only UK design studio gold at Cannes Lions 2017, they explored the created a “metaphorical exploration of air and the negative space it occupies”.
The campaign was created for the new Nike Air Max, exploring negative space with a colour scheme I’ve totally fallen in love with.

The designs work flawlessly as both a motion piece (above) and as 2D images (below). The campaign has been executed across numerous mediums including social media, DOOH, billboards and product packaging. I am obsessed.

I’ve discovered a gem – an ad for VW’s ‘Park Assist’ feature from their Tiguan model campaign (2016). The advert is by Grabarz & Partner (Hamburg), and proves that there’s no excuse for boring car ads!

There’s an interesting post which mentions how the ad went viral after testing it before release:

The video proved to be one of the best automotive videos ever tested, scoring significantly above average on key criteria like enjoyment, brand fit and brand appeal. As a result, Volkswagen released the video on Youtube.de where it was watched over 2 million times and uploaded by others. The video’s success prompted Volkswagen to use it on TV, and at last count the video had received over 36 million views across all platforms.

Designer and illustrator Greg Heinimann was curated by author and journalist Reni Eddo-Lodge to design a book cover for her much talked about book ‘Why I’m No Longer Talking to White People About Race’. Reni had originally published a blog post which received so much attention that she decided to write a book about racism in Britain.

I had heard about Reni’s book a few months ago via a post shared by a friend on Facebook. I am yet to read the the entire book, but it seems like something that everyone should be interested in educating themselves about. I recommend reading the blog post called ‘I, Racist’ by John Metta, in which he thanks Reni for talking about racism “long before I had the courage to start doing it again”.

The book is published by Bloomsbury, where Heinimann is an art director. The brief requested a typography-only design, and after many rejected concepts, he created something that from a distance reads “Why I’m No Longer Talking … About Race”. Contextually this reflects the message from Reni regarding white people ignoring racism and their privilege:

I was trying to convey the human interaction behind the title. More importantly, I wanted to play with people’s first impressions and interactions with the book and create a double take in public. The crux of the book is that white people won’t engage in conversation on the topic [of race].

I love the design of the book and you can see the previous concepts here. Greg has created something so simple yet very aesthetically pleasing, whilst still remaining on context with the subject of the book.

If you haven’t been to the new building for the Design Museum which recently relocated to Kensington, you are missing out. The architecture and gift shop alone are worth a visit!
The exhibition “California” caught my eye based on the parts that explore ‘freedom’. The exhibition explores more than just the expression of human rights freedom:

California: Designing Freedom explores how the ideals of the 1960s counterculture morphed into the tech culture of Silicon Valley, and how ‘Designed in California’ became a global phenomenon.

The central premise is that California has pioneered tools of personal liberation, from LSD to surfboards and iPhones. This ambitious survey brings together political posters and portable devices, but also looks beyond hardware to explore how user interface designers in the San Francisco Bay Area are shaping some of our most common daily experiences. By turns empowering, addictive and troubling, Californian products have affected our lives to such an extent that in some ways we are all now Californians.

Aside from the array of Apple inventions and iconic technological advances that California has blessed the world with, the most interesting part of the exhibition for me was “Say What You Want”. Described as “tools of self expression and rebellion”, this part of the exhibition showcased artefacts that were created to highlight racism, sexism and homophobia: 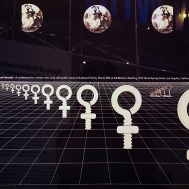 P.S. sorry for the awful photo quality! Taken on my phone.

It was incredible being able to be so close to relics that were created to protest against the biggest human rights movements in the world. They even displayed newspaper articles from the past, and contemporary pieces created against Trump’s America.
I cannot recommend this show enough. It has to be one of my (if not THE) all time favourite exhibitions.

The last few weeks have been both scary and uncertain for the UK, and with today’s results it’s safe to say we’re all feeling rather fed up. I’m immensely worried about the potential coalition between conservatives and DUP (who on earth are they?!) because collectively they represent everything I am against for this country, and the rest of the world.

In times of strife we must remember the positive things about this country – what we’ve all achieved, what we’ve got to look forward to and who we’re proud to call British. A personal hero of mine is British icon Louis Theroux – a man who is openly against Tory policies and against the intolerance that we often see in British modern society. Yesterday, he advised people to “bear in mind British values of tolerance, fair play, and caring for society’s least advantaged.” Couldn’t have said it better myself!

The UK is a bit of a mess at the moment but we’ve gotta get Theroux this together.