A few weeks ago when the weather was hot, I went shopping in Sloane Square and ended up in the Saatchi Gallery. I hadn’t been there in a while, and was far more impressed this time than I was on my previous visits. I took photographs of pieces that particularly interested me.

“The title of Gerald Davis’ triptych Fagboy 1986 announces its autobiographical basis right from the start. As a young adolescent, Davis dreamed of becoming an animator in the vein of Walt Disney, and his extended time alone, drawing, seemed weird to his brother and his friends, and the name stuck (“fag” being code for “outsider” in the slang of a 12- year old boy in 1986). Recounting the narrative from the perspective of the adult artist, Davis infuses the easily slighted sensitivities of early teenagerdom with the wry detachment of hindsight. The drawings’ washed-out palette of delicate pink evokes the muzzy glow of the Hollywood flashback, as well as the perceived oddness (and suggested effeminacy) of Davis’ obsession with drawing, both then and now.
Sprawled happily on the bedroom floor, the young Davis copies an image of a cartoon character as a threatening foot appears as the door; then, pinioned in the kitchen, the phrase FAG BOY is scrawled on his chest; and finally, we see pages of his sketchbook with drawings of Mickey Mouse and Donald Duck, along with a scrap of paper that reads “Animation is not faggitty!!”, followed by many hysterical exclamation marks. The narrative is one of martyr-like persecution, and there is a sly allusion to religious images of the suffering saint here – both in the triptych format and the image of Davis’ body receiving the humiliation, like St Sebastian. Yet Davis’ detachment is such that his suffering younger self is looked on from afar, distorted and exaggeratedly spindly, an alien who used your name, as our younger selves can sometimes seem.” 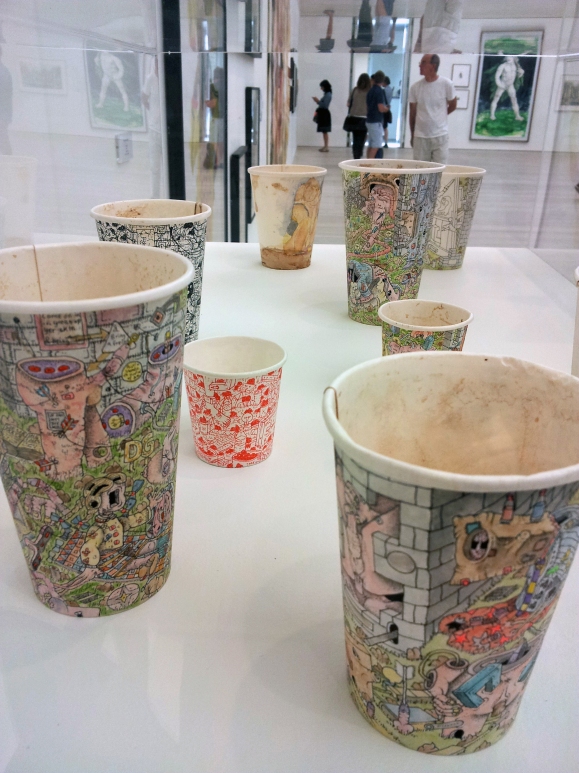 “Paul Westcombe’s work was, like so much great art, born of boredom. Working as a car park attendant on a twelve hour shift, Westcombe started drawing on whatever material came to hand – London Underground receipts, toilet plungers, mop handles – and, especially, the paper coffee cups he’d just drained in an attempt to stay awake.

These cups became the ideal surface for Westcombe’s wildly carnivalesque drawings of the sort of neurotic thoughts that plague the mind in solitary moments, their titles – Sex is Boring with Me, You’re Hardly Ever Here And When You’re Here You’re Bored – forming a self deprecating running commentary on the drawings’ own unbridled visions.”

“Ry Fyan’s dystopian architectural fantasies have all the complexity and meticulous visual invention of, as the artist puts it, “drawings on a notebook from childhood.” Improvisational in method, yet drawn from a number of remembered sources, Fyan’s drawings represent a bleak vision of American power. In The Metropolitan Meth Silo, a many-turreted castle, US flags flapping from its pinnacles, crouches on the horizon against a sickly sky. Small human figures scuttle in its shadow, but there’s no sense of the building being enterable; its grand arches seem bricked-up, a vision of authority at odds with the world around it. The drawing’s title makes some unnervingly jarring references to the Metropolitan Museum of Art in New York and the epidemic of methamphetamine abuse in America, the juxtaposition calling upon different structures of power in its feverish collision of signs.

The image’s original source, a 1903 photograph of a ‘Corn Palace’ in North Dakota – a huge temporary structure built annually of dried corn, made to celebrate agricultural abundance – gives the image its densely worked patterning and alarming swastika (actually a Native American symbol, but its resonances would be hard to miss). As in Fyan’s Hood Rich, the iconography of American power appears to have created its own enclosure – it’s both fortress and prison. A stack of Sudafed boxes (their contents the raw material for making meth) epitomize Fyan’s vision of the rotten heart of corporate America; the drawings’ dreamlike specificity and imaginative glee saves them from dogma.”

“The tension between old hat associations of two traditional modes – the provisional glimpse against the measured analysis, let’s say – create the stage for Tharp’s cast of sometimes grotesque, often sympathetic characters. Each face’s appearance is pitched between the seen and the glimpsed. As though mimicking the act of forgetting, faces blur and disappear in a cloud of marks: the act of description erases them. Ink is sucked backwards into the blankness of the paper (what was his name again?); the medium’s wetness makes nostrils and eye sockets splay madly (no, I don’t think we’ve met).

Tharp, inspired by the technique of Japanese calligraphy, uses the application of ink as a parallel of the mind’s movements, its unexpected focuses and elisions. As with any portrait, Tharp’s works are signs pointing to a void: the subject itself, physically absent, disappearing before our very eyes.” 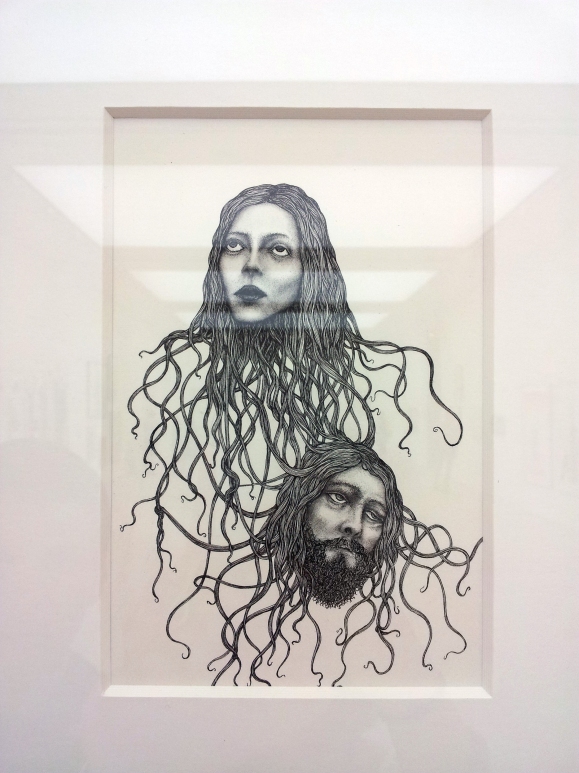 “Kleckner’s descriptive line – both realistic and excessively so, with a focus on textures of hair, fur and grass – gives the image its air of amplified realism, which tips over into the graphic arabesques of Art Nouveau. These are characters disappearing into pattern. In another, untitled work, a decomposing human face deems either vomiting or being invaded by a sea of swirling textures: leaf-like, lava-like. The matter of the world itself, with all its complex internal patterns, seems bent on dissolution and decay; nature is an unbridled thing, teeming with destructive beauty, as in the clambering insects dismembering the title animal in Untitled (Dead Bird).” 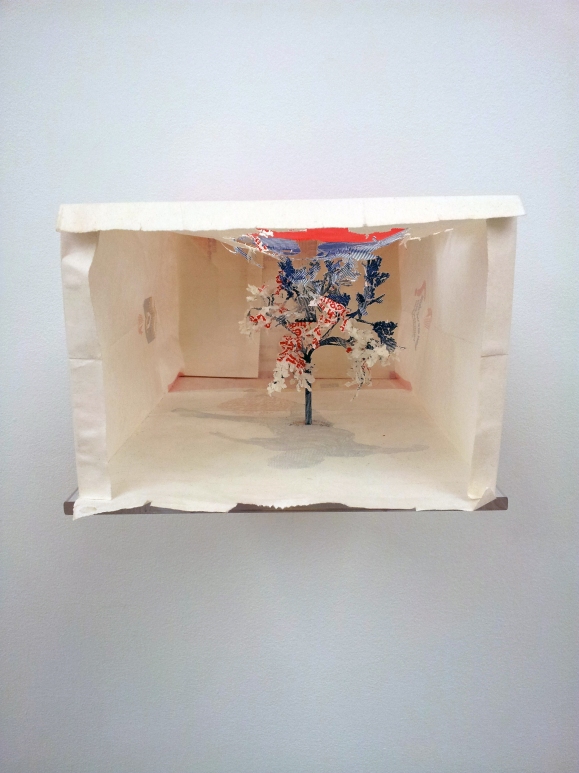 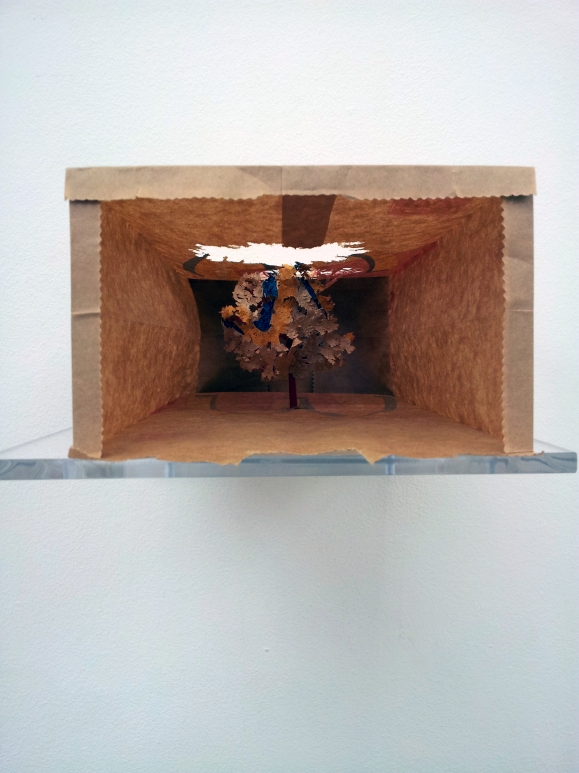 “The detritus of urban life has long provided material solutions for artists; in Yuken Teruya’s work, the discarded becomes the site of poetic transformation. Shopping bags – in some ways the emblematic item of rampant consumerism, one-use receptacles quickly ditched – are placed within the gallery at a ninety-degree angle, their ends to the wall, becoming peepholes for one viewer at a time. Their dark interiors are speckled with light from holes cut into the bag’s paper surface; the shape of the hole is that of a full-grown tree, so the bag becomes both stage (with its own lighting) and source of imagery.”

So different from the Oreo adverts in the UK, and so much better. I hope this plays on UK television too (not sure if they are), because the current ads are getting a bit samey-samey.

The advert takes a while to get going, but the strategy is great in the end!

Best tampon campaign ever! So unique in comparison to the ones I’ve seen.